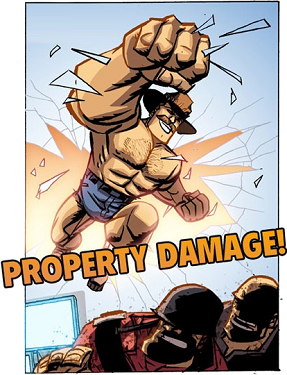 Saxton Hale is a daring Australian, President and CEO of Mann Co., and the star of many comics series. He is considered the fourth richest man in America (he was the sixth richest man, but surpassed the fifth by wealth and the fourth by killing him in a harpoon duel). His favorite pastimes include fighting, drinking, and battling with ferocious animals. In fact, most kids sleep with a teddy bear at night, but Saxton Hale sleeps with an actual bear that he tamed while in the Brazilian Jungles. His identifying features include a mustache, rippling muscles, a crocodile-tooth lined hat, and a patch of rotating chest hair shaped like Australia. He also refuses to wear clothes on his upper body "for obvious reasons".

Saxton Hale can be recruited by ending PvP Tournament - Saxton Hale in Adamantium League, or for 135 Command Points.

Saxton Hale: The name's Saxton Hale, Agent! Australian. CEO of Mann Co. And the man who's gonna burn this place to the ground! Give me some damn hippies and I'll beat them to death with my damn bare hands!

Retrieved from "https://maafanficuniverse.fandom.com/wiki/Saxton_Hale/LordRemiem?oldid=19142"
Community content is available under CC-BY-SA unless otherwise noted.